The Jamie Oliver brand is going from strength to strength, I've got his pans, flavour shakers, pestle and mortar, cook books and I even saw Jamie Oliver tomato plants in homebase! There was a question on the TV show Million Pound drop the other night asking which celebrity chef out of Blumenthal, Ramsay and Oliver hadn't won a coveted Michelin star. The answer is of course Jamie Oliver, but that's not what Jamie is about. Jamie's Italian was exactly what the naked chef is all about, great food, great flavours, served in a relaxed atmosphere.

Jamie's empire is expanding rapidly and there are now around 18 restaurants up and down the UK. We went to his Glasgow restaurant in the very impressive old GPO building in George Square. We went around 2.30pm and only had to wait a few minutes for a table. There is a real buzz the moment you walk in and the smells were fantastic. We opted for the seasonal meat antipasti plank to share, which was a selection of seasonal cured meats, Italian cheeses, pickles and a crunchy salad. Highlights were the buffalo mozzarella which was superbly creamy and the curly pickled green chilli's which were packed with heat and flavour. The presentation was stunning, with the plank placed across two large tins of chopped tomatoes! 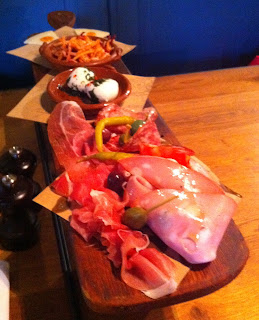 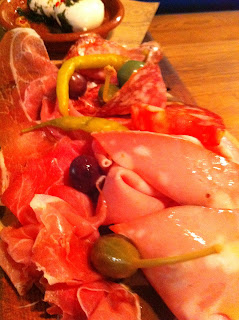 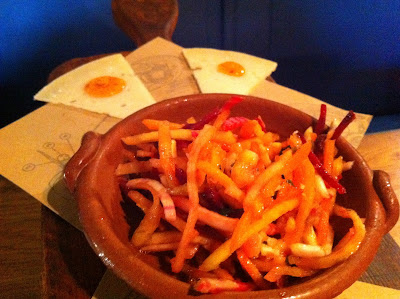 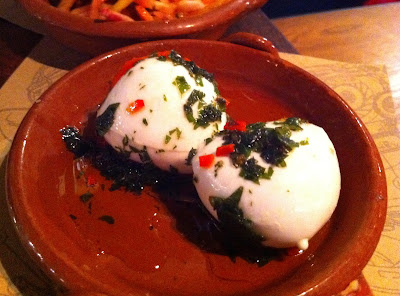 For main course I went for a special of blood orange, chargrilled artichokes, creamy gorgonzola and toasty pine nuts. This was a great, perfectly balanced salad, the only criticism would be that I was expecting more chunky artichokes where as the waitress claimed these were finely sliced through the salad which meant the flavour was masked. The gorgonzola and blood orange were a fantastic combination. My girlfriend, knowing I'd want to steal a taste, went for the carbonara but with gluten free pasta! All the main pasta dishes are available with gluten free pasta which was as good as any normal pasta. The carbonara was creamy and the smoked pancetta gave it a delicious flavour. All in all Jamie's Italian was fantastic food and at an affordable price, who needs a Michelin star?
No comments: