Where to eat in Prague (gluten free too!)...

Last weekend we were in Prague and prior to going I was more than a little concerned about what I would be able to eat. Czech cuisine is famous for it's dumplings, schnitzels and thick sauces - not exactly ideal for coeliacs! But the key to any trip is research and there's some great advice out there.

We already had our eye on two gluten free restaurants after seeing reviews on Travel Gluten Free and reviews by Gluten-Free Globetrotter, others we found after extensive googling and some we just stumbled upon! It's also worth printing a couple of gluten free translation cards which explain to restaurants exactly what you can't have (Czech doesn't exactly trip off my tongue!). Try Celiac Travel for gluten free cards.

Anyone reading who isn't gluten free, I'd also urge you to check out these restaurants if in Prague, all were excellent. 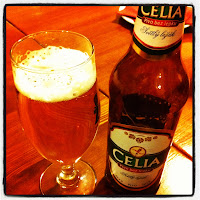 Svejk was one of the traditional czech restaurants you see all over Prague. It's off a little side street so you don't pay the crazy tourist prices you do in some of the main squares. Unlike a lot of the traditional restaurants it offers a completely gluten free menu and gluten free Celia beer! I went for the traditional Czech goulash with gluten free dumplings and my girlfriend had the gluten free Schnitzel (so I can try obviously!). We also went back for lunch and had hamburger sliders and chicken wings, which were also tasty. You get little gluten free flags in your food which is a nice, reassuring touch. 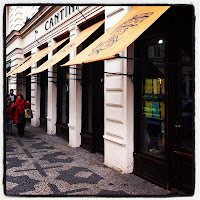 The next restaurant I would recommend is La Cantina, one we stumbled upon with a little help from the guide book. It was described as 'the best mexican in Prague' and it certainly didn't dissappoint. I showed them my translation card and they were happy to explain what was made with corn which I could have. The cheesy nachos were simply the best nachos I've ever had. Super stringy cheese served with a delicious salsa and guacamole. The chilli had huge chunks of tender steak and was delicious and my girlfriend's cheese, chicken and spinach quesedillas also received an excellent review.

Final recommendation is a little off the beaten track but well worth the journey. Na Zlate is completely gluten free which is fantastic to see. It would be a real challenge to notice the difference. Their homemade fresh bread was fantastically light and they do draught gluten free beer!  I went for an Italian cheese and bean soup to start and my girlfriend had a tomato and pesto soup. Both were delicious and my garlic toast fantastic. We also both had the beef in a creamy sauce with cranberries for main. The real highlight was the apple strudel dessert, beautifully presented  with light pastry and a rich apple and cinnamon flavour! I would urge you to check out this restaurant whether your gluten free or not, great service and an extremely reasonably priced dinner.
Prague is a great city with lots to see and do and there's some great places to eat too, even if you are gluten free!