A soufflé tart isn't normally the sort of thing I'd cook but I saw this recipe in a magazine recently and it sounded divine so I thought I'd give it a go. I had a sneaky cheat as I opted for a ready-made gluten free pastry by DS gluten free which was available from Tesco. Gluten free or not, ready-made pastry is great for a mid-week dinner if you want something quick and hassle free. I say hassle free... gluten free pastry is a little more crumbly than normal pastry so it was a little tricky to work with but the results were great. I'm usually one to play around with the recipe but this one I followed to the letter and it worked really well. You can see the full recipe on BBC good food here. I served it with some green beans with a little drizzle of lemon juice and celeriac cubed and sautéed in oil. 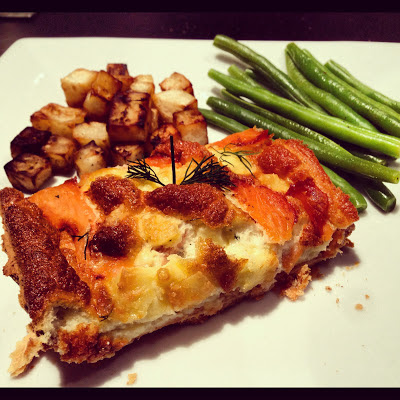 Your comprehensive guide to eating gluten free in Paris!

The French, famed for their love of baguettes, croissants and with patisseries on every corner, you may think that Paris would be a coeliac's worst nightmare, but hopefully this blog will make you think again. With a bit of research and help from twitter followers, we had some fantastic gluten free eating experiences in France's capital.

I do speak French which certainly helps but you can find coeliac translation cards online which I'd urge you to take on any foreign trips. Here's a great site which provides them. I took some emergency gluten free cereal bars but didn't need them as we found some fantastic places.

Le Jules Verne by Alain Ducasse at the Eiffel Tour

First up was quite an extraordinary dining experience. We were lucky enough to go to Le Jules Verne which is situated half way up the Eiffel tour and therefore has a spectacular view! It's also Michelin starred which usually means they're pretty clued up on what's gluten free. They were great at adapting the dishes, I did ask what a 'Savarin' was on the dessert menu and was told in no uncertain terms that it was "absolutely impossible for you", but you just have to get used to the direct style of French waiters! The food was sensational. A definite highlight was my starter of Meurette-style egg -  a baked egg in a red wine sauce with bacon and vegetables. It sounds simple, but was beautifully rich with flavour, the way French cuisine often is. The dessert was one of the best I've eaten anywhere. Soft chocolate mousse with shards of tempered chocolate, cubes of mint jelly and a mint 'snow', a beautifully fresh way to end the meal.

Paris is a city full of foreign influences, especially in it's food. We found this fantastic Thai restaurant, which happened to be my first dining out Thai experience since being gluten free. I had a little trouble establishing that I was gluten free but basically reinforced that I couldn't eat soy sauce as I know this is often used in Thai cooking. Both my fiancée and I had the red thai curries, I had duck and she had beef. Both were fantastically  fresh curries with the ripped thai basil over the top giving it an authentic taste. The accompanying rice was also fresh and fragrant. We stumbled across this place and I'm very glad we did! We then realised there's a few dotted around Paris, so if you're visiting be sure to be on the look out.

Breakfast can be a little more challenging but there's plenty of brasseries that will serve you an omelette. If however, you fancy some authentic bread, French madeleines and macaroons then get to Noglu! Noglu is a totally gluten free restaurant and if we were heading back I'd definitely check it out for dinner. We arrived hungry at 10am on the dot and in true French fashion they weren't quite ready for us, but I'm glad we hung around! The fresh gluten free bread was one of the best I've ever had and was served with some excellent jams. The picture says it all really - a great gluten free breakfast!
Tugalik

Twitter is a great tool for finding like minded coeliacs and this was how I discovered this gem. It's a vegetarian restaurant near the Sorbonne and serves a select number of specials at lunch. They label what's gluten free clearly and all the desserts were gluten free. We had a hearty fish dish, served on some crushed potatoes with greens in a white sauce. It was a really warming dish, especially as it provided a perfect escape from the showery weather. We shared a carrot cake and chocolate cake and both were great, you wouldn't have been able to tell they were gluten free! 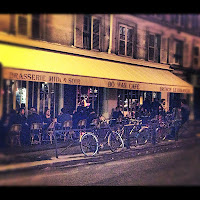 Our original dinner choice, didn't quite go to plan. The place I remembered visiting a few years ago was empty so we headed off in search of somewhere else which looked a bit more lively. We found Bo Man Café, an excellent brasserie which was bustling with natives, so we  went in. There was a great atmosphere and both of us went for the classic Steak & Frites. Chips are a fairly safe option in France as they don't deep fry much else but it's always worth checking. The rib eye steak was great, cooked medium and rare and full of flavour. We shared another classic for dessert - creme brulée - often a safe bet for those looking for gluten free options. And of course, it was all washed down with a compulsory caraf of red wine!

Helmut Newcake is a coeliac's heaven! You're greeted with a display of lots of delicate looking pastries, normally a torturous sight, but in Helmut Newcake, there's one difference, they're totally gluten free! It's a fantastic place which also sells gluten free products if you're planning on doing any cooking. The cakes were simply divine, so good that we had to buy some for the Eurostar home!