Your Guide To Eating Out For Gluten Free Pizza

In the gluten free calendar, 2012 will be hailed as the year of the gluten free pizza. They burst on to our high streets in the UK with abundance, as the chain restaurants competed to improve their share of wallet in the increasingly lucrative gluten free market. I have to commend them all for giving it a go, it's not easy to put systems in place in the kitchen to avoid cross contamination, re-train staff and create a great tasting pizza. Pizza's a very personal thing too, some prefer a good deep pan, others a crispy base, some a good tomato sauce, others laden with cheese. What I aim to do here is give you a brief review of how I found them:

Pizza Hut
I was surprised to learn that Pizza Hut were launching a gluten free pizza as the dietary blurb on their website had always suggested that they'd never be venturing into this market as it was in the too difficult camp. Pizza hut for me conjures up memories of teacher training days at school and half our class going to Pizza Hut for all you could eat! The gluten free pizza I had certainly brought back those memories. It's a good deep pan base with a sweet tomato sauce. We shared a BBQ chicken pizza and a pepperoni. They come as square pizzas on a black board with their own cutter, avoiding any horror stories of getting the wrong pizza - a great idea. We went during the launch week and although our waitress had to check a few things she was more than happy to do so. Pizza Hut will be great for those with coeliac children. It was perhaps a little over sweet for my palette but still a good pizza.
Ask Italian

Ask has become my favourite place for a great gluten free pizza. They already had a good array of pasta dishes and with the addition of pizza too, a lot of their menu is now gluten free. The pizza was fantastic, again served on it's own board with individual cutter. The base is thin and crispy and comes with a comprehensive selection of toppings. My favourite has to be the pollo picante, a great spicy chicken pizza, loaded with peppers and mushrooms. The staff are knowledgeable too which always gives you confidence when eating out.
Prezzo
The Prezzo launch almost went unnoticed. There was the odd rumour via twitter but little in the way of publicity. It's another good pizza too. Similar to ask but perhaps a slightly thicker base and generously covered with cheese and tomato. The Vesuvio, a pepperoni pizza with red chillies also packs some heat! When ordering though, the staff do always give you the disclaimer that they can't guarantee 100% that it will be gluten free as it's obviously produced in the same kitchen as non-gluten free pizzas. Possibly Prezzo being extra cautious, but it always feels slightly less reassuring than the others. Nonetheless another good option to have when eating out.
Bella Italia
Bella Italia was the first gluten free pizza I had, back when it was pretty much the only option for eating out for gluten free pizza. It's a thin and crispy base but perhaps a bit too crispy. I think the competition has moved on a little and it will be interesting to see if Bella Italia make any changes. It's still a good pizza and as coeliacs will testify, it's great to now have multiple options!

I recently heard that Pizza Express are now trialling gluten free pizzas in a few of their restaurants. If you've tried one it would be great to hear from you. Hopefully these will be launched nationwide in the future. I've still not had chance to pick up the phone and order a Dominos yet either but when I do, I'll be sure to add it to the list! I've heard there are some great independent pizza restaurants which have gluten free options, particularly in London which I'm hoping to try in the future. Any predictions on what 2013 will bring to the gluten free market? 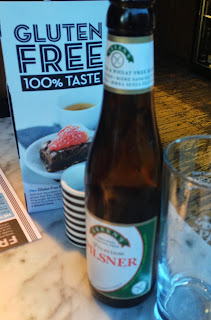 So were they saving the best until last? The Pizza Express gluten free experience has arrived. You can understand why they took their time - they wanted to do things right - great news for coeliacs. One of the difficulties pizza express had was the risk of airborne gluten when they were rolling their 'normal' bases. The launch of gluten free pizzas has brought about a total re-think and now the company uses gluten free flour to roll their 'normal' bases. Where others have missed a trick, Pizza Express has spotted it, a gluten free beer. It's a welcome addition to the menu and brings home the feeling of 'normality' even more for coeliacs up and down the country. There's a good range of toppings too and clear labelling. I went for a Gorgonzola,  leek and pancetta one which was a perfect combination. The base was excellent, good texture and more flavoursome than some of the competition. We couldn't leave without sampling the gluten free brownie. Brownie's have come under a bit of stick from the gluten free community due to being the gluten free pudding of choice for a lot of restaurants.  Pizza Express' was very good though, just dense and chocolatey enough and served with a tea or coffee of your choice. As a pizza lover, it's great to have another choice and another excellent pizza. Now they've ventured into the market hopefully Pizza Express can expand their offering  it would be great to have more variety in the starter and dessert department. Is it the best? Well, you'll have to be the judge of that!

It can sometimes be tough finding a great lunch spot when eating gluten free. Sandwiches, paninis and the like still dominate a lot of lunchtime menus. So I was delighted to discover Frank's Bar in Norwich, which has an exciting selection of gluten free options. It's always nice to support local, independent places and sometimes coeliacs can naturally veer towards trusted chains where they feel safe. Frank's is proof as to why it's worth exploring.

I've been a few times in the last year so I won't review a specific meal - it's easier to say I've never had a bad one! There's an eclectic mix of dishes with some Mediterranean influences but clearly not forgetting some of the great produce we have on our doorstep in Norfolk. Highlights have been Shakshuka, a delicious dish of Tunisian baked eggs with roasted peppers in a tomato saffron stew which is generously scattered with feta. The Spanish tapas dish is everything you'd expect with spicy chrorizo, salty manchego, paprika chips and much more. The more substantial dishes are equally as good grilled 'flat iron' steak was cooked perfectly medium rare and served with an excellent chimichurri sauce. It's all great value too, with decent portions for around the £8 - £9 mark.
The menu is all clearly marked with 'GF' signs to signal they are gluten free and some are marked with 'GFA' meaning they can be adapted to be gluten free. I've been offered gluten free bread in the past which is great to see. Whether your gluten free or not, Frank's Bar is definitely worth checking out. It's a popular place so occasionally you may have to wait for a table but for food this tasty and a great atmosphere, its certainly worth it.
No comments: