Earlier this summer my wife and I had an amazing break with our friends travelling around California and on to Las Vegas. We started in Los Angeles before travelling up the coastal road to Pismo Beach, Monterey Bay and on to San Francisco. After a few days in San Fran it was on to Sonoma, Yosemite National Park and Death Valley before ending our epic adventure in Vegas. It was an awesome holiday, from trekking the Hollywood Hills, to the amazing coastal drives, Alcatraz, wine tasting, waterfalls, the brutal heat of Death Valley, to pool parties and landing in the Grand Canyon for breakfast! But this blog is always about the food! Eating gluten free was easy, a bit of research to make sure there were plenty of options but everyone understood and had a good knowledge of what I could and couldn't have. So here's a whistle stop tour of some great gluten free places to eat.

Denny's (LA and Vegas but nationwide)
First stop was a classic American diner breakfast and Denny's has lots of gluten free options clearly marked on the menu. Be prepared for huge portions and refillable drinks. We ate at Denny's a couple of times for breakfast / brunch, I tried the Santa Fe Skillet - chorizo, potatoes, peppers and eggs and a Philly Cheesesteak Omelette with hash browns. Both very tasty, both absolutely massive.
Cheesecake Factory (LA and Vegas but nationwide)
Another American institution with a lot of gluten free options on the menu. Tasty pasta dishes and burgers with gluten free bread buns and an epic gluten free cheesecake called Godiva. It's a huge portion of deliciously rich chocolate cheesecake - make sure you save room!
Odys and Penelope (Los Angeles)
A trendy Los Angeles restaurant that specialises in grilled meats. They were really knowledgeable about what I could have and there were lots of options or adaptations they could make. For starter, I had grilled squid which was filled with potato hash and a roasted tomato sauce. Squid was beautifully cooked with a nice char and the tomato sauce had a real depth of flavour. For main course I had tri-tip with a Bearnaise sauce and grilled broccoli. The tri-tip, a cut of sirloin was sensational and really showed off their grilling skills!
Bay Cities (Santa Monica, LA)
Recommended by a friend as the best sandwiches in LA we had to try it! The place is an old Italian style deli and was packed with keen customers. The sandwiches were well worth the wait though. The gluten free ones are served on a delicious Italian style flat bread. I had the 'Godmother', an insane amount of Italian meats, provolone cheese, salad and peppers.  Definitely one of the best sandwiches I've ever had.
Sea Venture (Pismo Beach)
Great seafood restaurant overlooking Pismo beach. Succulent scallops were served with crispy Brussel sprouts and goats cheese. For main, the Sea Venture special, shrimp, scallops, mussels, white fish and sausage in a delicious tomato broth. All of the seafood was cooked perfectly. There were lots of clearly labelled gluten free options on the menu too.
Hula's Island Grill (Monterey Bay)
A busy bar with a great atmosphere and cocktails. The seafood on the Californian coast is so good we had to have the ceviche which was fresh and flavourful. The chicken wings came with a delicious coconut curry sauce. We shared shrimp tacos and shredded pork tacos for main, all washed down with plenty of Hula's Mai Tais! 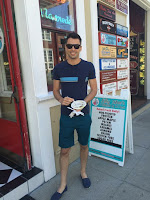 If you've got time be sure to drop into Lilly Mae's in Monterey Bay for gluten free cinnamon rolls!