I hope you all had a fantastic festive break. I spent a couple of days in my home town, York. We were staying in a budget hotel and thought we could do a little better than their breakfast so decided to venture out. We went for brunch at El Piano. I'd always been slightly put off by the concept of El Piano - vegan - and so had never tried it whilst I lived in York. But it's also 100% gluten-free. As any coeliac will testify, it's just nice to eat somewhere where there's no doubt in the back of your mind and you don't have to check and double check with the waiting staff whether things are gluten-free. How would a brunch, without any trace of meat be? I'm used to writing about perfect pulled pork and amazing ribs, so I wasn't sure what to expect.

It certainly impressed. It's like walking in to a Spanish grotto. It was small but cosy and there was a hearty aroma which I didn't expect from vegan food. Bizarrely, it's a mini-chain - with two other restaurants, one in Malaga, the other in Granada. Although the food clearly has influences from around the world the way in which your order is similar to Spanish tapas. My girlfriend and I both opted for the selection of mini plates, where you get three dishes plus rice each for £12.95. We were maybe a little ambitious as they were generous portion sizes.

The 'thai, thai' - a thai potato salad which had all the essential flavours of lemon grass, coconut and lime was fantastic. The corn fritters were probably my favourite, there was a kick of chilli and served with a cool salsa, they were a winning combination. The frijoles cubanos or black beans were probably the only let down - as there wasn't a whole lot going on. However, the dhal and falafels more than made up for that - both packed with flavour. The rice was also perfectly cooked and well balanced. 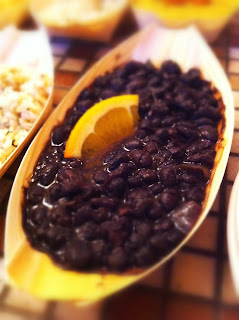 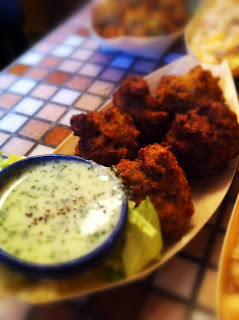 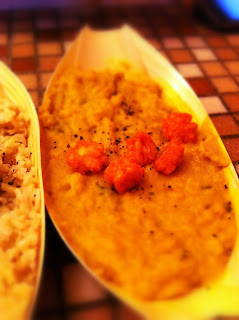 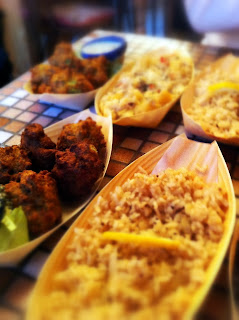 El Piano, also takes it's eco-credentials serisouly, and it was great to see that they even gave you the percentage of food grown locally by each dish. I think sustainability is going to become increasingly more important for successful restaurants.
All this got us thinking. After over-indulging throughout the festive period - could we be vegetarian for a week? So we've designed a week long menu, starting today and it's looking tasty! I'll post all the recipes and pictures next week and let you know how we got on.