I'm not quite sure how, but Jon and I ended up following each other on twitter. Seeing the occasional status about what he was up to, I soon learnt he was serious about food. Jon recently set up his own cookery school which you can find out more about on his website. Seeing photos of some of the dishes he had created and his support for local Norfolk suppliers meant that when he tweeted about an upcoming pop up restaurant he was working on, I jumped at the chance to go. 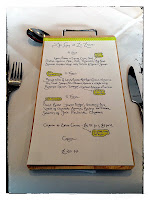 This was my first 'pop up' experience and I was intrigued to hear it would be at an Indian restaurant called Zin Zeera on the outskirts of Norwich. It was mothers day and for the mother-in-law to be, it was a bit of a shock to be pulling up to an Indian restaurant for Sunday lunch. There was a look of relief on her face when we were handed Jon's menus and she realised we weren't here for a Korma. The menus were a nice touch, hand written with little quotes and nods to local suppliers. I even sampled my first Norfolk cordial of rhubarb, ginger and orange which was a refreshing change. Jon's staff were great too, friendly and helpful. Jon had assured me that my gluten free dietary requirements would be catered for and he came to the table to explain tweaks he could make to ensure I had a full range of options.

My starter of boneless chicken wings with textures of garlic and sesame was a great start to the meal. Deliciously slow roasted garlic melted in the mouth and the wings were succulent and full of flavour. It was a well presented dish which could only have been improved with crispier chicken skin. Others opted for the smoked mackerel pâté, a generous portion which seemed to go down really well.
Mains arrived and were equally well received. My salmon and mussels were all well cooked and seasoned and served with a tasty arrangement of crushed new potatoes. The light white wine sauce tied the dish together well. One of the difficulties of a pop up, I'm sure must be using an unfamiliar kitchen and it was a testament to the chefs that everything was cooked extremely well. Jon was also relying on the Zin Zeera crockery which I think meant that the plating wasn't quite as refined as some dishes photographed so elegantly on his site. Nonetheless, both the butternut squash 'lasagne' and braised lamb enjoyed by others continued to deliver on flavour. The lamb provided by local butcher Tony Perkins received particular praise for it's deep, rich flavour and tender texture.
Desserts were definitely a highlight. The most creative dish on the menu of peanut butter 'jammie dodger' went down extremely well and I had one of the best brownies I've eaten. It even earnt the use of the cliché 'melt in the mouth'. The brownie was naturally gluten free too, other chefs should definitely take note.
For a first pop up, there was some really good cooking on show. Jon and his staff did a great job at making us all feel welcome. Launching your own business certainly demonstrates ambition and I think with this under his belt, hopefully there'll be even more to come.