A couple of years ago finding gluten free fish and chips was like finding the holy grail. Now, as awareness of food intolerances continues to increase and gluten free food becomes more mainstream the choice of chippies is getting better! Frustratingly, there are still those that claim to do gluten free but don’t have separate fryers (I won’t name and shame).  Let’s not dwell on the negative though; I think I’ve found my favourite fish and chip place ever 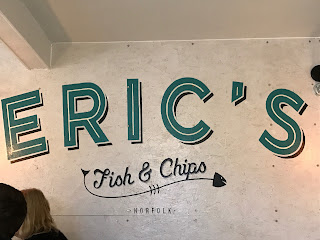 Eric’s fish and chips is in nestled in North Norfolk in the picturesque village of Thornham. At just over an hours drive from Norwich, I think it could be the first ‘destination chippie’. Plus there are tons of beautiful places to visit in this area, we were nearby at Wells beach this weekend but couldn’t resist the short drive to Eric’s. 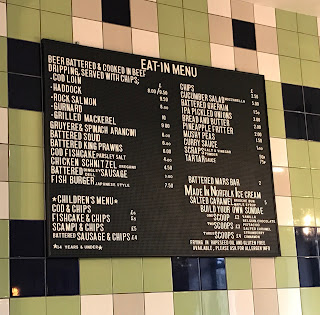 It’s simply decorated inside with a stripped back colourful look. The menu is kept simple too, which means that they pay plenty of attention to everything they do. Both times I’ve visited I’ve had the battered cod loin. The fish is the most succulent I’ve ever had, the batter crunchy and crispy. The gluten free batter is a thing of beauty… I had a look around and I think it actually looks better than the ’normal’ one. They use separate fryers so there’s no cross contamination. The chips are great too, crispy on the outside, soft on the inside. Letting you know which of the local spuds was used is a nice touch. Mushy peas and homemade tartare sauce are both excellent. An extra special mention has to go to the battered gherkins… I could just eat a plate of these! That same crunchy batter gives way to the acidic hit of the pickle and it just works brilliantly! There are so many dishes I want to try too but it’s hard to resist when the cod loin is so good. The squid and prawns both sound delicious, plus there are more unusual fish shop catches like gurnard and mackerel. 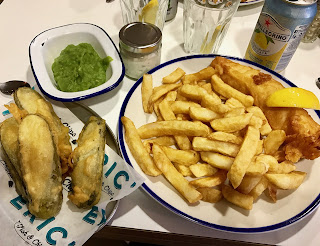 My only niggle would be that we couldn’t take the dog in. As I said the décor is pretty minimalist so I wouldn’t see a well behaved dog causing a problem. In the summer though, there a tables outside which will be dog friendly but it was cold and raining this weekend. We saved her a little fish to make up for it. Even she was a fan of Eric’s cooking!

I absolutely love this place and can’t wait to go back.

For a couple of other Norfolk gluten free fish and chip reviews, check out these links: