I've always been slightly sceptical about Michelin stars. The whole process is shrouded with mystery and can seem more focussed on pretence than food. This was my second experience of Michelin starred cuisine and my first trip to a two starred restaurant. The first had been to Maze by Gordon Ramsay which was spectacular food in a fairly, informal, trendy London setting. The setting of Midsummer House in Cambridge, where my girlfriend and I decided to celebrate our anniversary, couldn't have been more different, but the food was equally extraordinary. 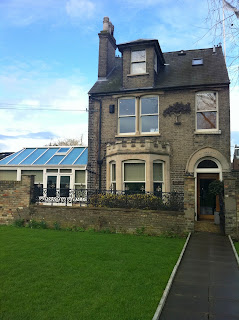 Midsummer House is a small cottage on the edge of Midsummer Common, situated on the river Cam in Cambridge. We were seated in a large conservatory area with pristine white table cloths and beautifully set tables. It felt very formal but the staff were friendly, especially when I mentioned that I was gluten free. Although, I was fairly certain that some of their staff were putting on their French accents! 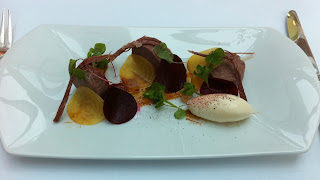 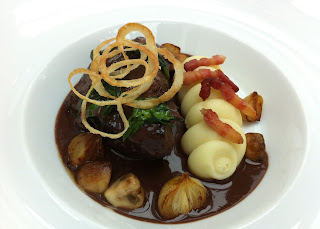 We began with an amuse bouche of Parsnip and Cumin Veloute with Honey Jelly which was full of flavour. It was light but really got the taste buds going, perfect as an amuse bouche. We both then had the Beetroot Salad with Corned Beef and Horseradish Ice Cream. The Horseradish Ice Cream absolutely stole the show, I've never tasted anything so extraordinary and it worked incredibly well with the rest of the dish. The beetroot was finely sliced with two different textures of corned beef, all presented beautifully. I then opted for the Daube of Beef with Pommes Puree, Mushrooms and Onions with a Red Wine Sauce. The beef was melt in the mouth tender and all the accompaniments packed with flavour and each cooked to perfection. I loved the little extras like the crispy pancetta and onion rings My girlfriend had Poached Pollack, Puy Lentils, Root Vegetables and Braised Celery. It was served with confit lemon which she said made the dish; attention to detail that seems to make a Michelin starred experience really stand out. We both then went for the Warm Cherries with Pistachio and Chocolate sorbet but both dishes looked very different as they had kindly modified mine to ensure it was gluten free. Both were simply stunning and once again the presentation was fantastic. 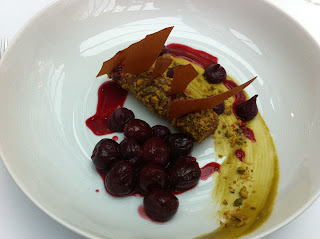 We had to have a tea and coffee because we couldn't resist the opportunity to choose home made chocolates from the large chest they rolled to the table. I picked a truffle chocolate that was actually made with real white truffle! These were also served with a type of Spanish Churros with salted caramel sauce and vanilla custard, and they gave me some marshmallows to ensure I had a gluten free option!

Whether you believe in the Michelin rating system or not it doesn't really matter, what you get when you come to Midsummer House is simply stunning food in a beautiful setting.