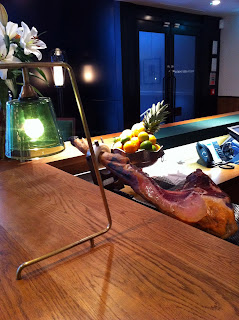 It was my birthday last week and this time last year I had my first taste of Michelin starred food at Maze, London, by Gordon Ramsay. I was instantly converted. The Head chef at the time, Jason Atherton, crafted some simply stunning dishes. One year on, I'm a year older and Jason Atherton has opened his own restaurant, Pollen Street Social. It's rapidly becoming one of London's hottest restaurants and just before we dined there, it was awarded a Michelin star within 6 months of opening.

We went on a Wednesday lunch time, the place was packed but had a real buzz and atmosphere. It's elegantly decorated, with large wooden tables and black leather seats. Sat at the bar having a pre-dinner G&T it was very tempting to order a plate of the Serrano ham they have on the bar but we didn't want to spoil our appetite.

The service was impeccable from the moment we entered. I informed our waiter that I was gluten free and he ran through what options I could have and what they could adapt. We decided to go for the very reasonably priced lunch menu (£25 per head), which meant we could treat ourselves the following day (blog to follow!). For starter, I went for the pressed ham hock, coco bean, squid, piccalilli gel and wild watercress. A generous portion of beautiful ham hock and topped with squid which was perfectly cooked - the dish tasted as stunning as it looked. My girlfriend decided on the slow cooked egg, with Scottish smoked haddock and curry puffed rice which she said was deliciously creamy, flawlessly cooked. The curried rice puffs added not only another texture but also a fantastic flavour and balance to the dish. 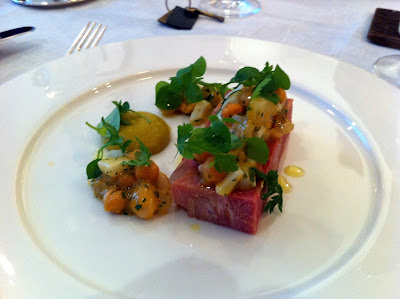 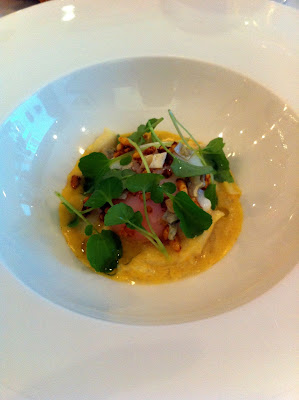 Jason Atherton takes a lot of inspiration from Spanish cuisine and that was clear in my main course. I had roasted black bream on a bed of Catalan paella with sprouting brocolli and black olive. This dish was less about inventive cooking and more about sheer flavour. The paella was packed with flavour and the fish impeccably cooked, with beautifully seasoned crispy skin. The touch of genius was in the broccoli where the heads had been mixed with black olive, creating a sharpness that cut through the rest of the dish. Roast Yorkshire partridge received equal praise and again showcased both fantastic cooking and creativity. Accompanied with a plum jam, kale and compressed apple, the flavours worked brilliantly with the perfectly cooked succulent partridge. 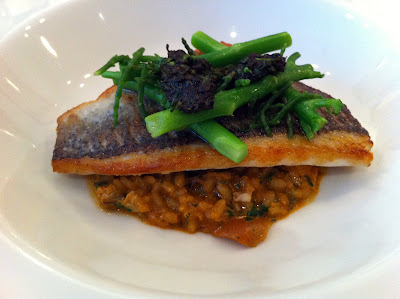 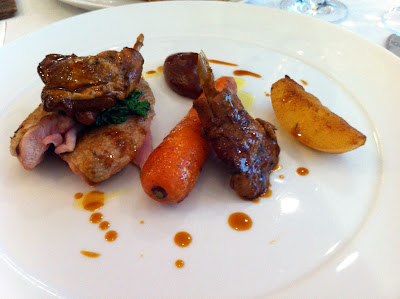 I'm not normally much of a dessert person, but I need to save a few superlatives for this! Unfortunately, the two desserts on the lunch menu weren't gluten free, which gave me the rest of the menu to choose from! It was an easy choice, I love rice pudding and judging by the previous courses I knew this one would be something special. The rice pudding, laced with vanilla was served in a little pan, and then in my bowl I had a piece of plum sugar on top of plum ice creaming and plum pieces. It all worked together brilliantly, easily one of the best desserts I've had. My girlfriend had the "PBJ" a homage to the American classic, peanut butter jelly. This was a peanut butter parfait with, cherry jam and creamed rice puffs. Beautifully assembled once again and a fantastic flavour combination. 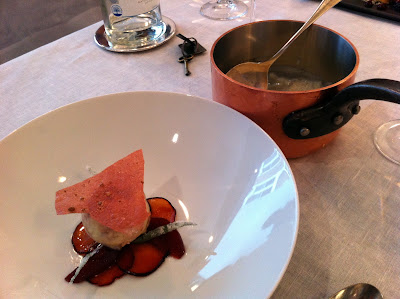 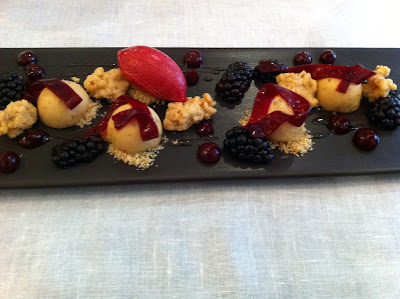 You're given a little something to take away with you when you leave, but I don't want to spoil the surprise for anyone thinking of going! After only 6 months, Jason Atherton has created a very special place indeed, Pollen Street Social has a very bright future ahead.