Where to eat in Montreal, Canada - Gluten Free 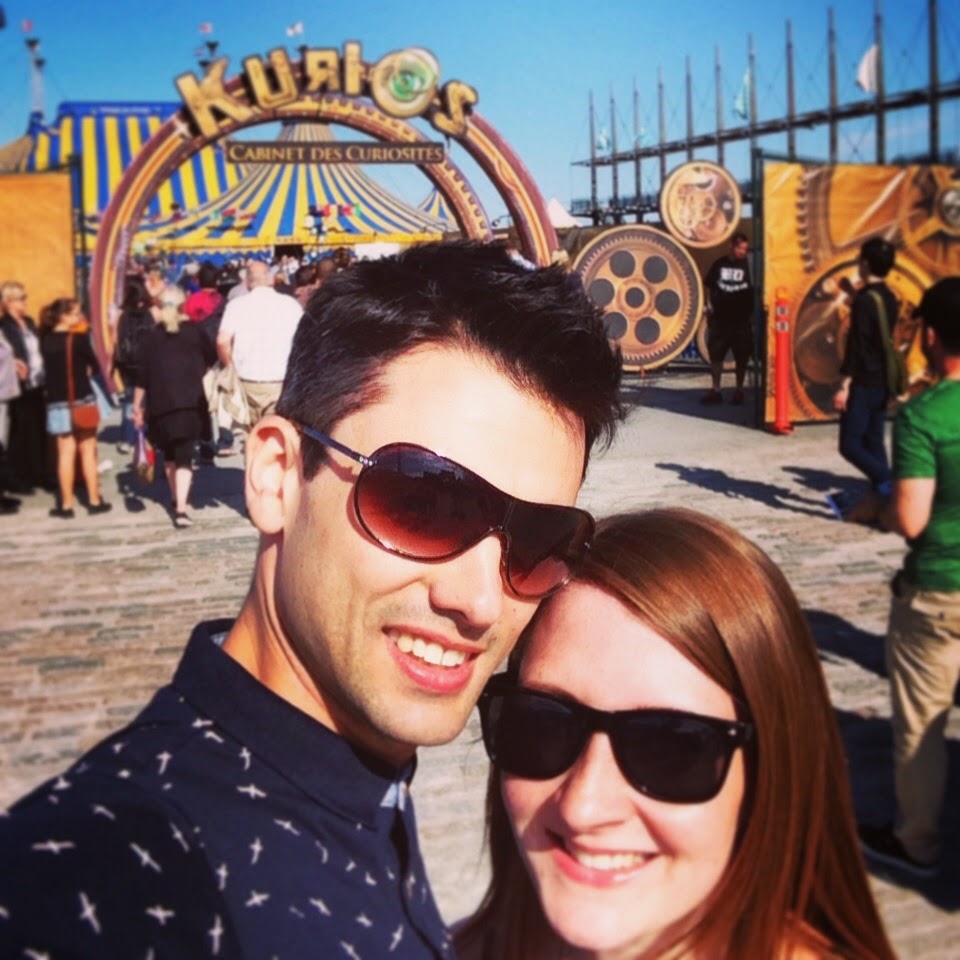 Next stop on the honeymoon was the marvellous city of Montreal. Despite packing for mixed weather the sun shone down on us as we walked round the beautiful parks and saw the sights of this fantastic French-speaking city. I speak French but most people seemed to speak English as well so there were no issues with explaining dietary requirements! One of the highlights was the incredible Cirque du Soleil, so if you get chance to see it in it's home-town then do so. Of course the food was a highlight too so here's a run down of some of the places we ate at:

Toqué is for serious foodies! The experience here was easily equal to some of the best Michelin starred restaurants in Europe. We had booked in advance and they acknowledged that I was gluten free when we were seated. We couldn't resist the temptation of the tasting menu. You've got to be brave at Toqué, you have no idea what you're going to get but I can assure you it will certainly excite and enthral. As we were on honeymoon we had to start with the champagne and oysters. You receive two glasses of champagne and the extremely knowledgeable sommelier talks you through the differences while you sample the fresh tasting oysters. I won't go into all 7 courses but I can guarantee that you'll have flavours and combinations you'll have never tried before. Highlights included a scallop ceviche with strawberries. It sounds like one of those terrible combinations an over-enthusiastic Masterchef contestant would try but it worked seamlessly. Sea urchin was certainly a first for me and with a creamy taste of the sea it didn't fail to disappoint. A beef dish provided rich dark meat and the pigeon dish which followed looked like artwork on plate. Toqué gave me the most unusual cheese dish I'd ever had, with flowers of cheese, smoky hay cream, and tangy mustard seeds. Everything was effortlessly gluten free and the little touches such as a different crumb around the cheese really showed the attentiveness of the chefs at Toqué. 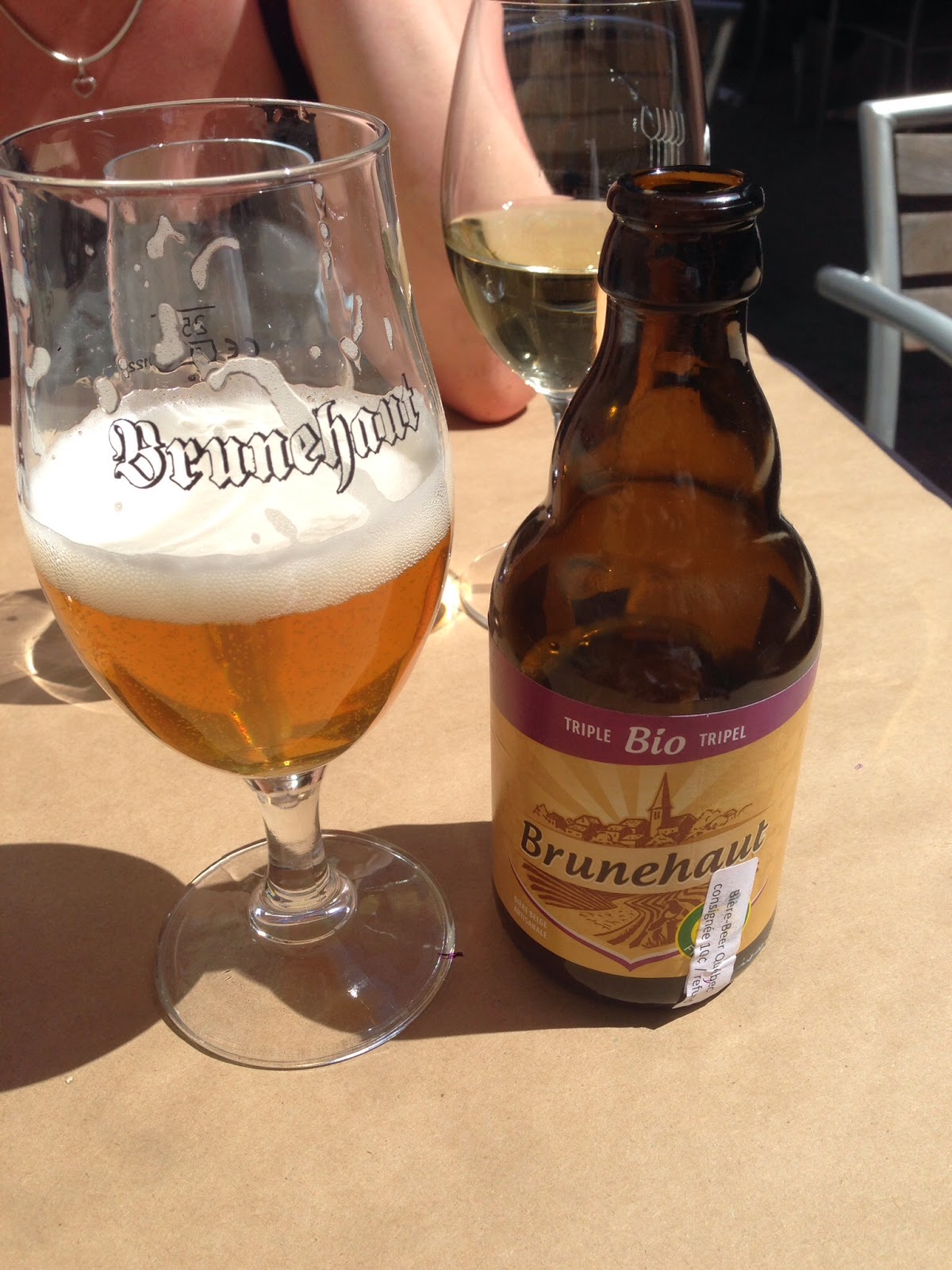 Accords is a fantastic wine bar and bistro with a quaint courtyard just down from the Notre Dame Basilica. They clearly mark the gluten free options on their menu which is great to see. We went there for a spot of lunch but as it was a Sunday they only serve brunch. In fact, we were in for a treat! They had a simple set menu with a few choices again clearly marking what was gluten free. We both had the salad to start and simple though it was, it was beautifully dressed. We both then had what we thought was the eggs Benedict (mine ordered without the muffin). This is where my French let me down in a good way! What we in fact ordered was eggs Benedict but instead of the usual ham or bacon we had huge lobster claws. The perfectly poached eggs and zingy hollandaise made for one delicious dish. As well as a large selection of wines they also have gluten free beer available! 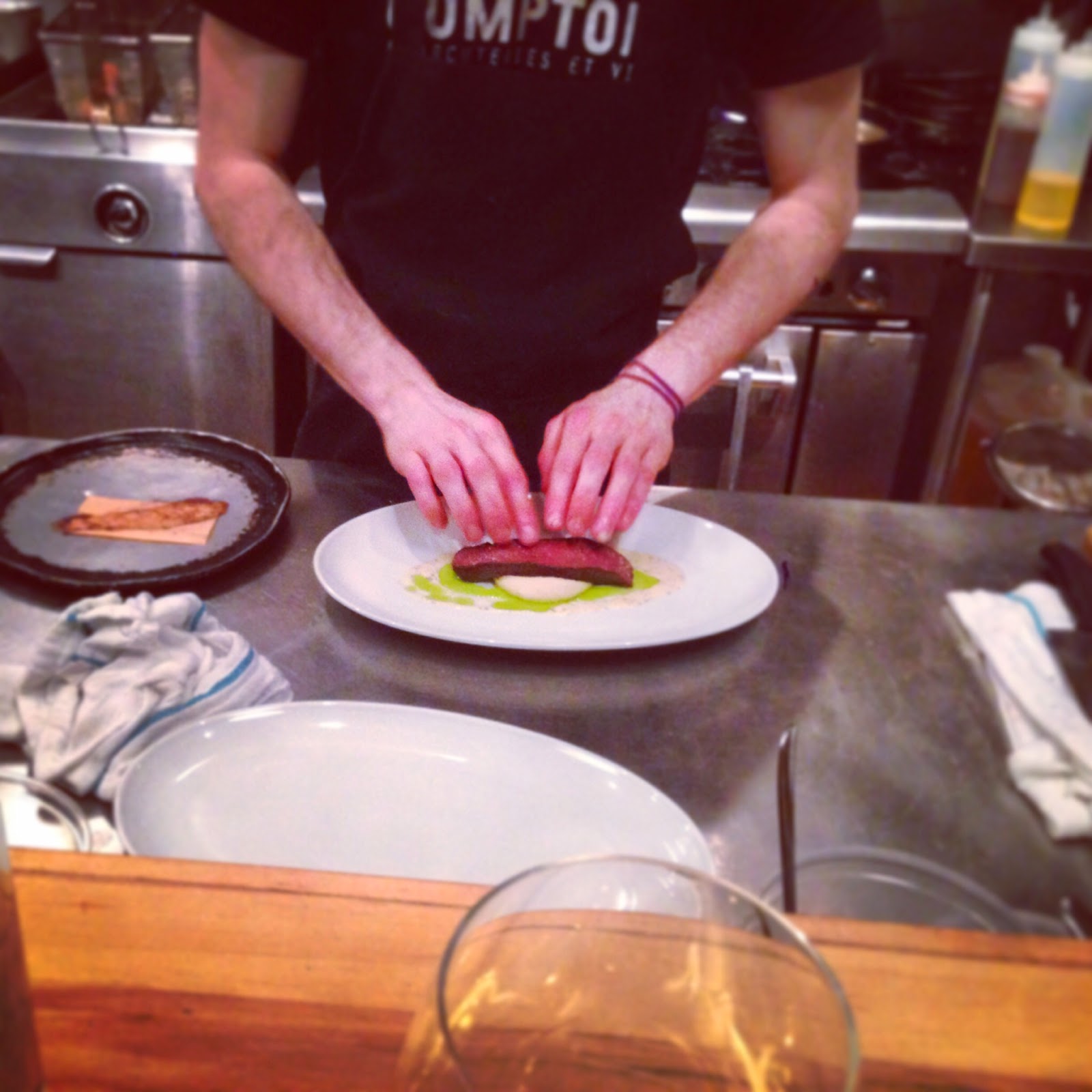 One of my favourite restaurants of our entire trip was Le Comptoir. It was helped by the fact that we had front row seats! Being able to sit at the bar and watch the chefs meticulously put together these delicately crafted plates of superb food was brilliant. The waiter checked each of the dishes we ordered was gluten free or could be adapted. It was hard not to watch the chefs with eagle eyes, but I soon relaxed when you could see the level of care and attention that chefs take in such a well-oiled professional kitchen. The dishes are small and perfect for sharing. We started with one of their home-made charcuterie platters, delicious smoked and cured meats. My favourite was a smoked bacon carpaccio with parsnip purée, sprouts and pickled onion. The combination worked perfectly and was some of the best bacon I've ever tasted. I loved this place and would definitely recommend booking as it was packed all night.

Just opposite Accords we found Café Pavé which is a great place to grab a gluten free sandwich for lunch. There's a whole host of different fillings you can have in your gluten free bread. I had the pulled pork sandwich which was the perfect fuel after a morning seeing sights. It's worth noting that like some gluten free bread in the UK, the slices are a little smaller so for those with big appetites, you might want to order two!
Nococchi was also another good spot to grab a gluten free sandwich - the BLT was particularly good. They also had a number of salads on the menu too.

For our last night in Montreal we found the Cartel Street Food Bar an eclectic mix of tacos, quesadillas, ceviches and Asian dishes. The menu was clearly marked with gluten free options and once again we found the staff knowledgeable. It was at Cartel that I had my first poutine, a sort of chips, cheese and gravy medley that is a Montreal speciality! Other dishes we tried included a blackened grilled chicken with a fruity guava dressing and a pork belly and pineapple fried rice. There's certainly something to please everyone here.

Finally if you're looking for a great bar, we loved Dominion Square Tavern - you have to try the Orange Julep!