The New Inn at Tholthorpe, near York

The chain restaurants are really starting to crack catering for the gluten free community. Most have the investment behind them to size the market share, test menus and put in place training and systems to avoid any potential mishaps. However, there are many independent places up and down the country that seem to be behind the curve. Not everywhere I might add and certainly London has the sheer volume of people and places to cater for a multitude of requirements. Outside of the capital the coeliac experience can be a bit hit and miss. One place that certainly hits the spot though is the New Inn at Tholthorpe near York. 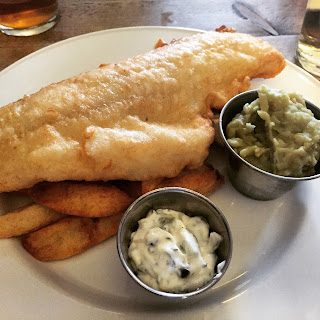 I was born and bred in York and often head back for a long weekend to visit friends and family. We decided to head to the New Inn after coming across it on the Tesco clubcard site as it takes their vouchers. There was a review that mentioned it catered for gluten allergies so it certainly sounded promising.

After a long drive from Norfolk I was ready for refuelling. The menu had a host of options for coeliacs and was clearly labelled. When I told our server I was gluten free he also told me which of the specials I could have and then to my excitement added that they could make the fish and chips gluten free too! He reassured me that they were cooked separately, I was sold! They were delicious too, a light and crispy batter, 'proper' chips (not like door stops but nothing skinny about them either), mushy peas and a creamy tartar sauce. I just about had room for a dessert and couldn't resist the sound of a lemon panna cotta with a cherry coulis. It was a great find, good pub food at a reasonable price with a range of gluten free options. 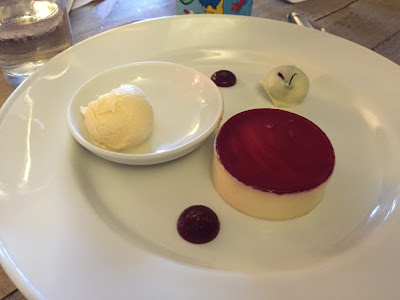 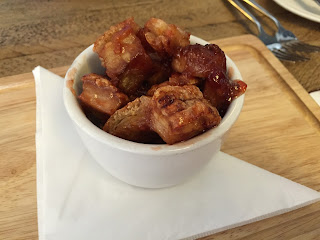 It was so good we headed back on a recent trip to Scotland. We judged it was about half way and thought it would be the perfect place to stop for some lunch. The lunch menu had a good range of options too, smaller plates, sandwiches and some larger dishes. We over ordered but it was definitely worth it. A rich and creamy baked Camembert which was served with an apple and grape chutney was suitably moreish. Perhaps not as moreish as the little deep fried pieces of pork belly served with a sweet chilli sauce! Soft tender meat with a crispy crackling  around the outside, these were really something special. Sandwiches served on a really good gluten free bread were great too. 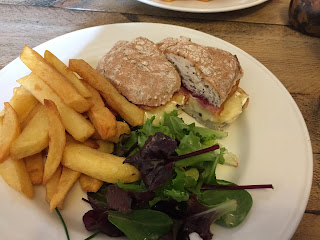 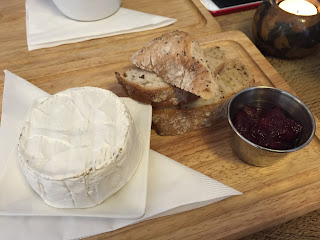 I'm hopeful that this level of catering for coelics will become the norm and more pubs will catch up with the New Inn. Until they do, I'll be heading there whenever I get the opportunity!