The Reindeer is one of many traditional British pubs up and down the country that you would drive past everyday without even a consideration. You'd expect to walk in and see some people propping up the bar having a pint of lager and a few people dotted around, perhaps having some oven cooked fish and chips or a well done steak with peppercorn sauce. Unfortunately, people judge books by their covers but The Reindeer in Norwich is proof that you shouldn't. 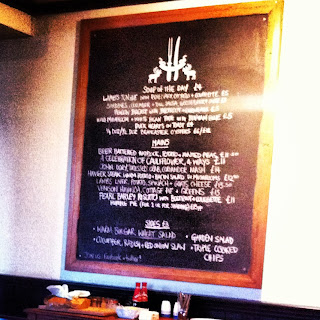 The Reindeer has undergone something of a food revolution. It's focus, seemingly to take under used cuts of meat and transform them in to great British dishes. The menu has duck hearts, lamb's tongue, hanger steak and humble pie to name a few - fantastic to see somewhere making use of cuts which are often discarded. Even better to see somewhere take these cuts and make them taste fantastic too.

Being gluten free wasn't an issue either, the waitress explained what I could and couldn't have with ease. A number of the starters came on toast but she said gluten free bread was available if I wanted any of those. It would have been nice to be offered the gluten free bread when everyone else got their customary bread rolls but she may have just forgotten. On the whole though the service was spot on, friendly and informative (it's the sort of menu where people ask a lot of questions!). I went for the pigeon breast with beetroot and greengage for starter. The flavours were balanced really well, the gamey pigeon offset by the fruit and beetroot. My pigeon was slightly overdone for me but it didn't detract from the overall dish. In a big group it's difficult to get comprehensive reviews but the starters seemed to go down well and a lot of people were trying things for the first time! Main course was excellent - venison haunch, cottage pie and greens. On the opposite end of the scale this was a little rarer than I'd normally go for but the meat was beautifully tender and packed with flavour. The highlight of the dish was the cottage pie - smooth mash on top of flavour packed venison mince - incredibly moreish. My fiancee had the celebration of cauliflower 4 ways dish which received an excellent write up too.

It wasn't particularly busy for a Saturday night, hopefully that will change as word of mouth spreads. In the meantime they should maybe think about giving the book a new cover, the food is certainly worthy of it.