My girlfriend and I went to Cambridge this weekend for our anniversary and stayed at the excellent Hotel Felix, a modern, elegant hotel on the outskirts of the city. Graffiti, the hotel's restaurant was equally modern and elegant with attentive service. We'd booked it well before I found out I was gluten free, so this was going to be the first test, and I was very impressed. The menu had a star next to all the dishes which were suitable for coeliacs and a diamond against those that they could adapt to make gluten free. The menu wasn't restrictive with the majority of dishes already gluten free.

The menu was also very inventive. For starter, I had Baby Squid stuffed with Chorizo on a bed of Tomato which had real tasty Spanish flavours. My girlfriend had Ballotine of Goose with Roast Pear, Port Syrup and Goose Scratchings which was equally as good. The main courses were the real highlight. I had Roast Breast of Mallard, Confit Leg Boudin, Potato Rosti, Brussel Sprout Chiffonade and Plum and Orange Jus. The breast was cooked perfectly and the Leg Boudin (a duck sausage) was sensational, absolutely packed with meaty flavour. The Rosti was all caramelised on the outside and had a great texture. My girlfriend had Fillet and Braised Blade of Tilbury Beef, Shallot Tart Tatin, Crisp Bone Marrow and Cavalo Nero which received equal plaudits. The only let down of the dish was the Bone Marrow which was a crispy nugget, lacking any real filling. Neither of us could resist the Bitter Chocolate Delice with Rapsberry Ripple Ice Cream and Salted Caramel Sauce which tasted as fantastic as it looked. 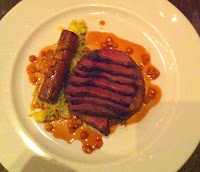 The restaurant clearly seemed to have a gluten-free influence and with an increasing number of people eating gluten free they're on to a winner. Providing me with a gluten free bread roll was real attention to detail and the bread is probably the best wheat free bread I've tried! 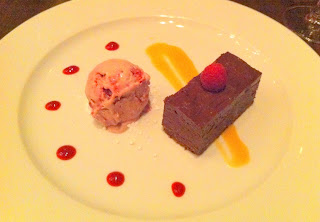